My oga penetrates my anus at night, my madam beats me daily” — Maid tells Police

A 19-year-old has narrated to operatives of Lagos State Police Command how her ‘Madam’ assaults her daily, while the husband sodomises her at night.
.The Lagos-based couple is currently being investigated by the Police over physical and sexual abuse of the maid at their Aunty Toyin Street, Kodeibo Estate, Isheri-Oshun, Lagos.
The victim, Blessing Joseph, who has been working with the couple for six months, hails from Imo State. Vanguard gathered that throughout her stay with the couple, Blessing was subjected to different forms of physical abuse from her madam, Isioma, and sexual abuse from the madam’s husband, Chigozie Ezeafor.
It was gathered that whenever Isioma was away or asleep in the night, her husband sneaked into the victim’s room and raped her through her anus.
Victim’s story
Narrating her ordeal, the victim said she has suffered terribly in the hands of the couple, who delight in dehumanising her regularly.
She further revealed to the Police that her “Madam,” Isioma Ezeafor, beats her up at the slightest provocation, while her husband, Chigozie Ezeafor, sneaks up to her whenever his wife is away and has made several painful attempts to penetrate her anus.
However, trouble started when, on December 17, Isioma Ezeofor’s temper got the better part of her and she emptied a kettle of hot water on the maid, scalding her skin. Confirming the report, Superintendent Chike Oti, Police Public Relations Officer, Lagos State Command, said the last attempt by Mr. Ezeofor to rape the victim brought the issue to light.
The couple is being interrogated at the Gender Section of Lagos State Police Command and will be charge to court at the end of the investigation. Operatives from the Gender Unit of the Police Command has have taken the victim for proper medical care. 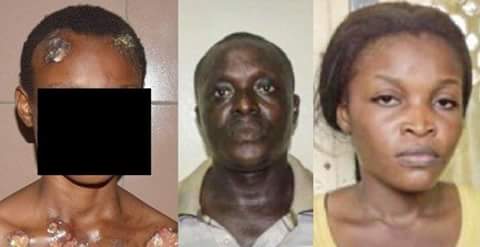 “The Wedding Party 2: Destination Dubai” – Too Many Cooks Almost Ruin This Broth