Rivers State Governor, Nyesom Ezenwo Wike has assured the people of Ogba/Egbema/Ndoni Local Government Area (ONELGA) that the State Government will continue to build the security infrastructure in the  area to enforce peace.

He stated that the younger brother of slain cultist, Don Wanny, Mr Oluchi Igwedibia will soon be tracked down alongside other fleeing members  of the Don Wanny clan for the greater peace of ONELGA .

Governor Wike spoke on Tuesday during a security meeting at the ONELGA Council Secretariat Pavilion.  The governor was accompanied by service commanders.

Governor Wike revealed that Rivers APC leaders have approached the 32 cultists declared wanted, asking  them to join their  political platform ahead of the electioneering period.

He stated that his administration will not be deterred by the political antics of  Rivers APC, saying that the deadly  cultists will be traced and  brought to justice.

“Nobody should play politics with security of lives. Since we declared these cultists wanted, they have approached  them to work with them. Whether or not they work with APC, they will meet their Waterloo”, he said.

He urged the people of ONELGA to work with the Rivers State Government to ensure that the area remains peaceful, so that the people  can recover from the devastation of the past.

The governor said everyone  must work together  to build the peace of ONELGA to avoid a repeat of the New Year tragedy.

He said: “I am here today to further express my condolences to the families  that lost loved ones and also express my sympathy  to the injured.  Like I said before, the Rivers State Government will foot the hospital bills of the injured and support support the families of the deceased “.

Governor Wike said the manner that Don Wanny met his untimely end, indicates that nobody will escape the long arm of the law, irrespective of the the charms they possess.

While thanking the local vigilante group, OSPAC, for their contributions  to the restoration of peace and the dislogdement of Donny Wanny, he warned them against following the criminal route, as they will suffer the Don Wanny fate.

He said that Don Wanny reign of terror lasted throughout  the leadership of Amaechi, pointing out that he was eliminated as a result of the commitment of his administration.

Commenting on the politicisation of Rivers Security by the Minister of Transportation, the governor regretted that the Minister has devoted his days at the Federal Executive Council to creating crisis in the state.

He listed several projects that he attracted to the state as a Minister of State for Education and wondered  why the Minister of Transportation has failed alongside his godson, the Director General of NIMASA.

Governor Wike announced that all projects started in ONELGA will be completed and more projects will be initiated for the people.

Earlier, Chairman of ONELGA, Mr Osi Olisa said that the people of the area will continue to work with the Rivers State Governor to entrench peace in the area.

He said that ONELGA remains loyal to the Rivers State Governor beyond 2019 because of his achievements. 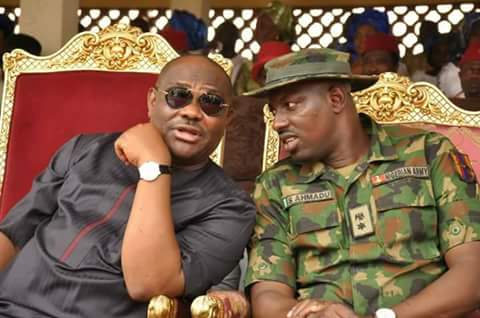