Some students of the Benue State University have explained why they are unable to pay their school fees.
Students of the institution frustrated academic activities over management’s refusal to allow them have access to the examination hall over unpaid school fees.
However, when newsmen approached some of the protesting students for comments, most of them blamed ‘snake’ for their inability to pay their fees.
A final year student of Business Administration, who simply gave his name as Sure, claimed a snake swallowed his fee.
“There’s no money anywhere, the little one I had was swallowed by snake,” he alleged while displaying a placard with the inscription, ‘snake swallowed our school fees.’
“I don’t want to spill over because this is my final exam. The management has to be considerate because of what the economy is saying. We will pay when the snake vomit the money,” Sure said as other students behind him chorus ‘yes’.
Academic activities in the Benue State University have been paralyzed by students of the institution.
The students are currently protesting against the school management’s refusal to allow those who are yet to pay their fees partake in the ongoing examination.
Most of the victims, who are final year students, could have a spill over if not allowed to take part in the examination.
The protesting students, who were seen displaying various placards, locked the two major gates leading to the school premises, chanting solidarity songs.
They called on the management to allow them sit for the exams.
Culled! 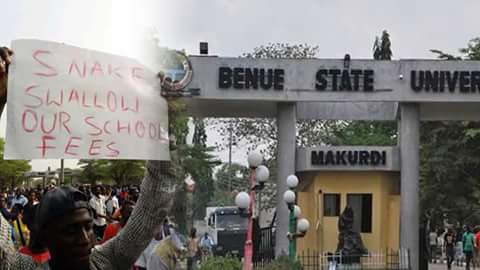