Rivers State Governor, Nyesom Ezenwo Wike has stated that President Muhammadu Buhari’s  proposed visit to the  state may be aimed at reviving the fortunes of the All Progressive Congress (APC) that is  dead in the state.

Flagging off the reconstruction of Egbelu Street and construction of link roads in East-West in Rumuodara, Obio Akpor Local Government Area on Thursday , Governor Wike said that the Federal Government has not informed him on the President’s visit and the reason behind his visit.

“Maybe the President is  coming to make sure that he will improve the fortunes of the APC that is dead in Rivers State.

“Apart from Jesus Christ, we don’t know of anyone who has risen a dead thing.  APC is a dead party in Rivers State.  No matter how you fast and pray, it will never wake up”.

Governor Wike charged  Rivers people not to be bothered  the politics or otherwise of the visit, because the state is very peaceful.

“Let nobody bother him or herself that the President is coming for security reasons.  We don’t have security challenges in the state.

“We have never had herdsmen killings or crisis  in the state , except when some criminals tried to disrupt the  peace and  they were checked.  We resolved that challenge. “

He stated  that there is no state in this country where kidnappers and armed robbers are not operating. He said if President Muhammadu Buhari is visiting  because of Kidnappers and Armed Robbers, then he should visit all the 36 states.

He, however, noted that as the state’s that produces the wealth  that  supports the country, President is welcome to visit the wealth producers of the nation.

According  to him: “Since the administration has abandoned Rivers State for three years, this visit may be a blessing in disguise. The President may  use the visit to complete the Port Harcourt International Airport, the neglected East West road, the neglected sea ports and the rejected Port Harcourt-Aba road”.

Speaking on the road, Governor Wike said the Chairman of the Rivers State Council of Traditional Rulers, King Dandeson Jaja drew his attention  to the challenges faced by residents of the populated surburb.

He urged the people to cooperate with the contractors to ensure scheduled completion of the road.

Commissioner of Works, Dum Dekor said the seven roads will be completed in six months, while the project  will offer employment to 230 youths.

The Works Commissioner noted that the road construction will also resolve the environmental challenges facing the residents.

Chairman of Obio/Akpor Local Government Area Caretaker Committee, Prince Noble Amadi praised the governor for key projects across the area, assuring him of total support in 2019. 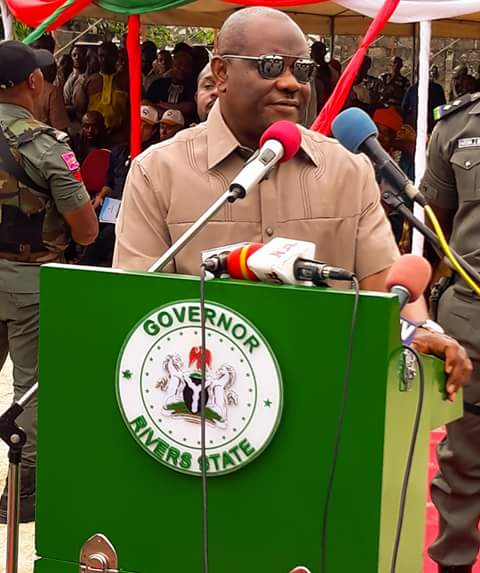