Megastar, Port Harcourt based rapper/singer, has been judged as the most ‘Mostrated and Anticipated’ upcoming artiste in the region.

Online news and entertainment medium, Port Harcourt Mundial’s team of analysts came out with this assessment over the week.

Entertainment editor, Christopher Ukandi, said the decision was based on Megaster’s growing fan base, creativity, work rate and a blossoming career that is steadily drawing crowds, especially the younger elements, within his short period in the entertainment industry.

After a few weeks on the airwaves in August last year, Megastar’s new music video reportedly reached over 1,070,000 views online and on-air within a period of one month, with thousands more reading the story on newspapers and magazine.

His ‘Go down Low’ album, launched in December 2016, and rated as one of the best upcoming songs, had Masterkraft as producer and Port Harcourt’s prominent Indiana asmix/masterer.

In February, 2017, Megastar participated in the International Rap Freestyle Show-Off, a rap festival featuring artistes from South Africa, Ghana and other parts of Africa, which gained him more fame in the entertainment industry.

After a successful debut album and video gesture, the Hip hop and Rap artiste in October last year released a new song titled ‘Do as I do,’ featuring popular Nigerian singer Tha Ibz, and was adjudged the latest hit on the streets and on air.

The song ‘Do as I do,’ premiered on Port Harcourt’s hit radio station, Rhythm 93.7 FM, was an effort at adopting a unique Afro Pop & Raga style. Megastar said this was an attempt to enrich his music and adopt a genre different from those of his earlier songs, ‘Rap God,’ ‘Survive,’ ‘Dago’ and ‘God down low.’

Explaining how he started in 2016, Megastar said “I officially became a studio recording artiste in 2016. It’s a pleasure that I am just over a year in the music industry and I’ve been privileged to do things with great people like Indiana, Empee’Tunes, Masterkraft, De Kamp, Overheat Crew, State Filmz, Cash Krop, Alaibe and now Tha Ibz.

“Am using this opportunity to appreciate my fans, family, friends and crew for their support and always being there for me. I’m also encouraging the upcoming artistes to keep chasing their goals no matter the challenges they are facing because entertainment is never an easy task, it devours concentration, time, funds and social acclimatization,” he said.

Port Harcourt Mundial gathered that the video ‘Do as I do’ keeps gaining momento via television, radio play and online. Megastar’s manager, Alaibe Odunu, said the artiste is currently on a tour of Orlu-Owerri, Imo State (in June), Abonnema in Akuku Toru Local Government Area of Rivers State (also in June), Umuahia, Abia State (July), as well as other areas.

Megastar joins a growing list of up and coming artistes, who are making the entertainment scene in Port Harcourt rock. 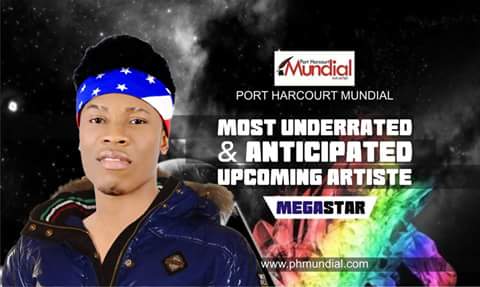