I became tired of women so I bought a sex doll worth N5M!’ – Nigerian Singer, Mr. shaa

Nigerian singer, Benjamin Ogwehi, aka, Mr. Shaa, who became the first Nigerian entertainer to invest in buying a sex doll has revealed that he is yet to have sex with it.

In an interview with Sunday Scoop, Shaa claimed that he was yet to have sex with the doll.

“My sex doll is a virgin. I named her Tontoh because she is a very beautiful woman.

“Now, I can have peace of mind and I can focus on my music. I did not buy the doll to satisfy my sexual urge; I just wanted something that looks like a woman that I can take care of.

“I don’t think of sex any longer; I only think of how to make music. I have not had sex this year and I cannot remember the last time I had sex.

“I am not trying to paint a good picture of myself. If I want to have sex, I know where to go once I have my money.”
Queried on why he got the sex doll if not for intimacy, he said ;

“I got the sex doll because I became tired of women. If I can spend N5m on a doll, I must have spent more on a lady and nothing came out of the relationship.

“I am not in a relationship at the moment but I was engaged last year. The outcome of the union was the major reason I invested N5m in a sex doll.

“I later found out that my two-year-old baby wasn’t mine. You can imagine how I felt when I got to know that I was not the biological father of the baby girl I was taking care of.” 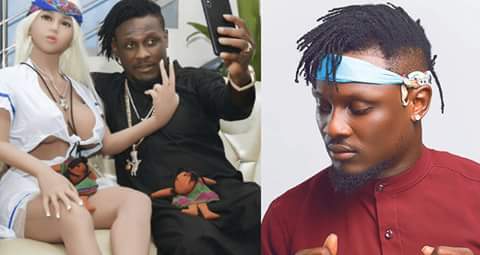 “Change your narratives by proving you are #NotTooYoungToRule" _ Benny Odumu Advice Nigerian Youths As He Endorse Hon. Davematics As Governor

Wizkid’s ex, Sophie Alakija, survives a ghastly accident with her husband and 2 kids