HUGE VICTORY ABOVE DESTRUCTION OF A DREAM by Success Ochulor

Let me bore you a bit with my long post. Sit down and read what no man did except God. I’m a serving Corper in Rivers State. After my vouching on 3rd about 3:30pm, I was supposed to go back to Oproama, the Island where I serve but there was heavy downpour and all of that, the boat captain refused to cruise. I had so many things to do that same day, needed to Aba to get a report and since this captain guy was wasting time, I decided to board to Aba.

Getting to Eleme, the crowd waiting to board to Aba was so much. Now, because I was on my complete Corper’s uniform, a private car decided to give me a lift up until oyigbo. It was so easy getting a bus 🚌 to Aba. The crowd wasn’t much this time but the persons available rushed to the bus and someone got me a seat in the front row because I couldn’t rush to get into the bus. Maybe he did that for me, because he saw me on my uniform. I was sitting exactly after the drivers seat.

Our trip started and it was just few minutes to 7pm. I was so happy that I got a bus finally without so much hassle. Just before we approached NEPA before flyover in Abia state. Our driver seems not to see the sienna coming towards him and in the quest to dodge the sienna car, he didn’t see the gallop before him and boom……. Our driver hit the Mack heavy duty vehicle packed somewhere. A-ha!. It went right inside the Mack and our bus was stuck inside and I was just beside, in front of the vehicle. I couldn’t move my legs as I was struggling with my legs. Fire started right under my buttocks and Goooooooooooooooooodddddddd, I was screaming 😱 and shouting and shouting. The fire 🔥 was still burning up on me. 😰😰. I was shouting, I couldn’t move my legs. I saw myself dying in a stuck bus. I heard people breaking the windows from behind, people breaking the doors of the vehicle. A-ha, God, the pains,the fire, I saw death right before my eyes. But in a twinkle of an eye, as the driver broke through the window and escape through the window and my legs still stuck, I didn’t know how, but somehow, I can’t explain up till this moment, my eyes moved and I escaped through the window and the fire was still burning me up, I was running and people around shouted that I was fall into the water there. The water with all these blue green algae, Dear God!

The fire stopped. And the real pain started. I removed my khaki trouser on the road  because it was so hot.  I realised I couldn’t move. My buttocks down to my legs has been burnt. I tried to walk a bit, I couldn’t. Ahaa. My tears has been dried and I don’t have anymore tears to shed.

I asked people around to help me to look for my ID card, ATM, money, Phones inside the black purse I had they told me the bus has been razed down and everything has been burnt. I couldn’t cry at least, I’m alive right?. A woman gave me her wrapper to tie as my clothes were burnt.

A good Samaritan moved me to a hospital with his car to the hospital to the center city. My friends  came around and today I’m alive. I can talk, I can blink, I can laugh. I can say anything I want to say.
I didn’t die. The fire didn’t consume me. My Bible told me that “even though I walk through the shadow of death, I fear no evil “. Even though, I’m hospitalised with so much pains, my body swollen up, 16 -hour drip, about 14 injections 💉, been lying face down for over 48hours and still counting,  can’t turn sideways, can’t stand, . Yet, I didn’t die. I can’t die. No. I can’t die sorrowfully.  I have a covenant with God that no harm shall come near me.

This God is too Good. If you see anyone, tell him or her that only Jesus can do this. And He did it for Success Ochulor.

The picture I took during vouching clearance and the ones my friends took after the incident. 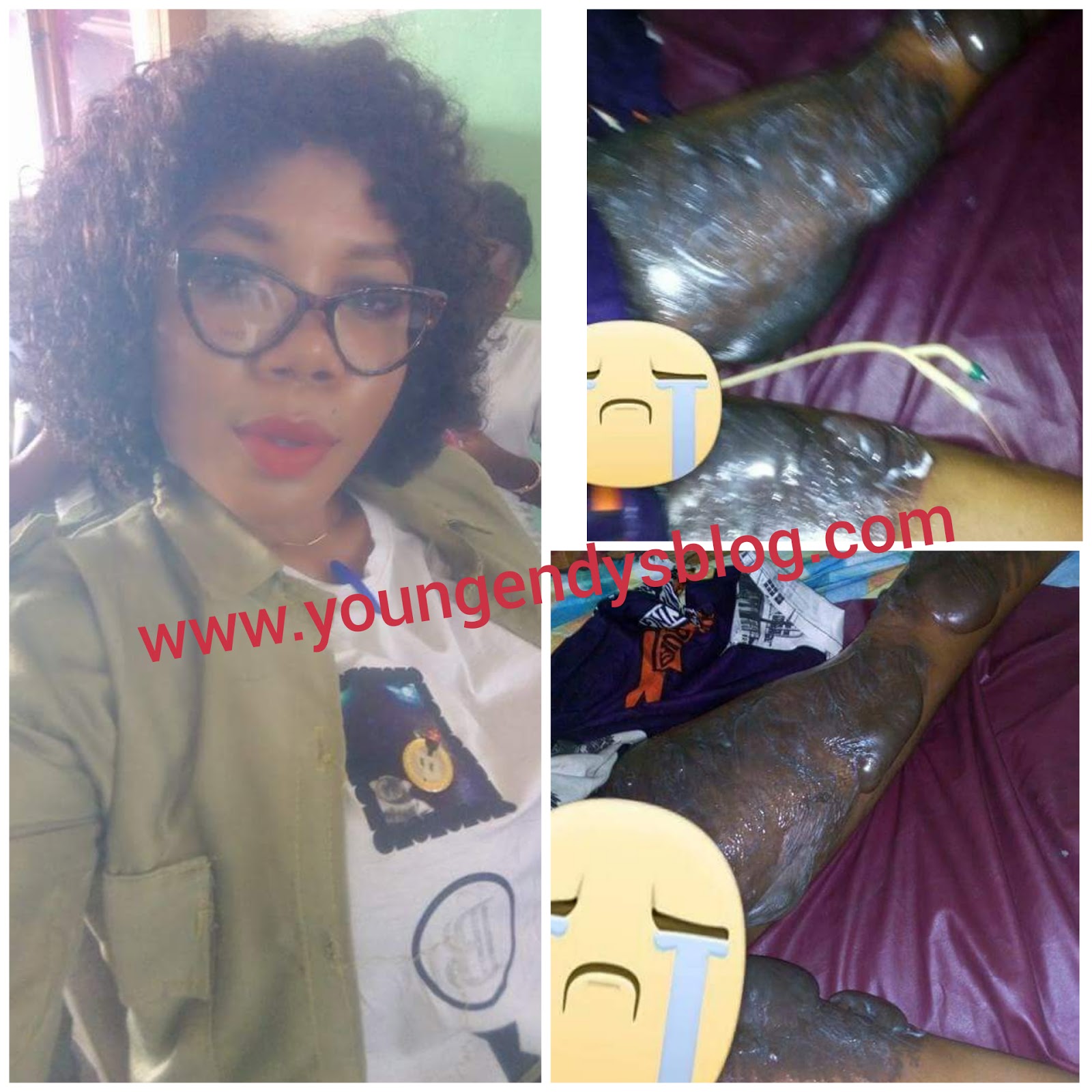